For a very long time, Singapore and in particular, Southeast Asia has had a very distinctive and unique culture of a certain group of migrants from China who came to Southeast Asia to trade and eventually settle down, marrying local women.

These group of individuals, referred to as ‘Peranakan’ which means ‘locally born’ is used to refer not only to the Peranakan Chinese but also other Peranakan communities that developed in Southeast Asia like the Chitty Melaka and Jawi Peranakans.

The exhibition, has been segregated into 5 different sections namely:

Distant Origins highlighting 16th to 18th century Sarong Kebayas, Slave Girls and Heiresses highlights 19th to 20th century Baju of the Nyonyas, Being Tropical showing Lace Kebayas and Batik Sarongs in the 19th century, Lace as Identity showing Nyonya fashion between 1900s to 1950s and From Corset Covers to Camisoles.

Entrance to the exhibition 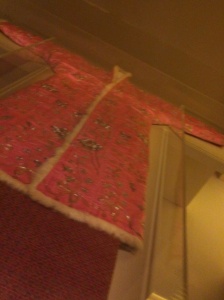 One of the unique kebaya tops - lined with rabbit's fur

The curation of this special exhibit ensures that visitors are taken on a journey through time to understand not just what fashion was like through time, but also how certain influences affects the design and make of the Sarong and Kebaya itself.

Mix and Match Try It On Booth - No Stripping Please

One particular highlight of this exhibition that I’d like to focus on would be a section which allows visitors to try on the Sarong Kebaya itself and to have a photo taken. An interactive and education section which allows the visitor to also understand from which period of time did the particular piece of clothing came from. It’s a great way to learn aside from just the ‘See No Touch’ exhibits.

Most of the collections are donated from Mr & Mrs Lee Kip Lee and there are even some which are borrowed from the Asian Civilisations Museum as well as the Dutch Museum from Netherlands.

Whilst there, be sure to also observe and read every single detail explained (that’s why it’s written and displayed isn’t it?) because you will also understand how the Sarong Kebaya has gone through a transformation in terms of its’ production through the advent of technology.

One of the things which I asked the curator was “Do the nyonyas in the past really put in effort to match their Batik Sarongs with their Kebaya tops?” because I was impressed at how the bottoms seem to often match the tops and was also interested to understand how this process was done. To which the guest curator, Peter Lee said that “YES” and in fact, the process by which a purchase was done in the past would be to first select the Batik Sarong and then to find a Kebaya top to match it.

Apparently, the Batik Sarong is the more expensive piece and the one which is more important than the Kebaya top. He further elaborated to state that in modern times, most people seem to do the other way around, getting the Kebaya top first and then trying to find a matching a Batik Sarong – which is actually a more difficult process.

It was definitely a very educational visit and well, I certainly didn’t have enough time to visit the permanent exhibition and would definitely be back here. Now, I’m thinking, am I a Peranakan too since I have Chinese ancestral heritage. I remember my late grandmother used to wear Sarong Kebayas quite often, even at home.

There are some programmes during this exhibition in the month of November, great for those on a school holiday or have nothing to do next month!

For those who want to visit this place:

Complimentary guided tours in English, Mandarin and Japanese are conducted by Museum’s volunteers. Tours are not available during volunteers’ annual break in mid-Dec to mid-Jan and on public holidays.

If you’d like me to cover an event or write (or critic – my discretion) an article (Arts,  Education, Entertainment or a Social event), do drop me an email at whatsabd@gmail.com