So, today is the first day of the Lunar New Year as our dear Chinese friends all over the world celebrate the year of the Rabbit. In all my 20 over years as a Singaporean Muslim, this is also the first year that I celebrate Chinese New Year.

It’s something small but definitely something that I look forward to build up as the years grow.

In times of when MM Lee’s insensitive and possibly seditious comments were made to request Muslims here to be ‘less strict on observances’, here and today, I was tested on the subject matter.

It’s a quick reflection of what happened many years back as a primary school student as how I had blogged previously (read here) and again, I’m tested as an adult.

Most non-Muslims would be aware that Muslims don’t eat pork nor drink alcohol and would only eat food that is Halal.

But what exactly is Halal?

To the non-Muslims, Halal would be food that has been slaughtered in accordance with Islamic methods and hence, would purchase food products that comes with the label, Halal.

Thank you dear non-Muslims friends but did you know there’s actually more to what Halal is.

Halal, in food context also applies to how the food is being prepared. The cooking utensils and oil must be clean of food items that may cause ‘contamination’ to the Halal food.

This means that the Halal food cannot be cooked using the same cooking oil and utensils that has been used to cook pork products which then brings me how I, as a Muslim exercised my knowledge of Islam and my individual comfort level to address such issues. Pork products also cannot be kept at the same area as the Halal food because the Halal food can still be ‘contaminated’ (this one’s a bit more technical to explain, so I shall leave that aside).

Earlier, I had lunch at a friend’s place where pork was served. Aside from the pork, there were also of course dishes which are Halal, rendering it safe for Muslims to eat. BUT where the Halal food was cooked, the same utensils and oil COULD have also been used to cook pork, therefore, rendering the Halal food, now Haram.

Despite knowing that the food served COULD have been ‘contaminated’ by pork, I still ate food that were Halal.

My reasons are simple.

I’ve been invited to a non-Muslim house. My friend has exercised due diligence and knowledge in ensuring that the food prepared is Halal and can be consumed by Muslims. Such knowledge is as far as what my friend knows and I’m not expecting my friend to fully understand the concept of Halal.

And last but not least, with the reasons above, as a Muslim, it is sinful to offend someone and in this case, to offend someone who has invited me over to the house as well as exercised due diligence and knowledge in ensuring that I can enjoy the lunch together.

That is me being, ‘less strict on observances’.

Of course, I’m sure there are many Muslims out there who’d probably refuse the food served knowing that it might have been cooked using the same utensils and oil to cook pork. I’m also sure that there are some reading this who’d go ‘Eeeee…’ and also probably a few who’ll just say ‘What the heck!’. 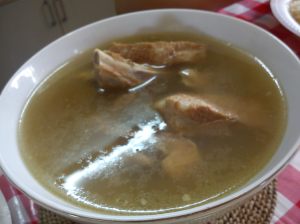 But to put it into perspective of what I’ve experienced previously as a child, I could refuse the food but my friend would feel slightly offended and I would/ could have embarassed my friend. My friend would then have to go in search of locating other food products which I can consume Halal-ly and the food that has been cooked would not be eaten, thereby, ‘wasted food’.

As a Muslim, I don’t think it’s appropriate to be demanding of others who have made efforts to ensure that we can enjoy our time together at the same table. More so, to offend or embarrass others or to be wasteful.

But, at the end of the day, it’s still up to the individual to exercise how ‘strict’ you’d like to be on yourself in your dealings with others as a Muslim.

And to end it, I didn’t eat till I burped or ate till I was damn full. I ate sufficiently enough, applying the rules when eating pork when there’s no other food source available.

I’m not making an issue out of this but I’d just like to perhaps educate my non-Muslim readers on what Halal food is and to my Muslim friends, to perhaps exercise flexibility and sensitivity when dealing with such situations.

We even had fortune cookie to tell us of our fortunes!

And I definitely deserve a present!