Traditional art comes in varied forms with its’ own rituals and performative elements which make them so intriguing.

Just months before Mount Merapi in Indonesia erupted taking with lives in this destruction, I was planning on a visit there to meet the guardian of the volcano, Mbah Marijan, who was said to have possessed special qualities which enabled him to speak to the volcano.

ChannelNews Asia had made a documentary about him and the rituals performed every year and the significance of these rituals towards ensuring that the volcano is kept happy at appeased.

However, as I watched and tried to understand the rituals performed, I was besieged by questions of the relevance of practice in traditional age-old passed down rituals and the mergence of Islam, the faith practised by those who performed the rituals.

But without the need to look too far beyond the shores of Singapore, there are groups here in Singapore who practice a certain kind of art which is controversial to the very religion that they practice. 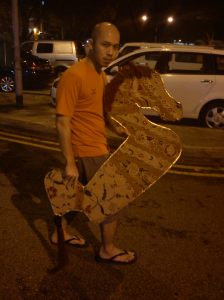 The practice is not called ‘Me and Bobby’.

The art form practiced is called ‘Kuda Kepang’ and here’s an intro from me.

Having created the video, I then embarked on finding out more about what Kuda Kepang is about, its origins and why the mystic behind this performative art.

Interestingly, Kuda Kepang despite the many talks about how this art form is associated with the satan, it actually began with a holier purpose to spread Islam in the Indonesian province, created by Wali Sembilan, one of the Wali Songo.

It is however rather dubious in its art form to be placed under Islam with how offerings and spells are required. The dancer on the horse when placed under a spell is then being controlled by supernatural beings who enter their bodies which enables them to do stunts or feats that no normal human being is able to.

If you are interested to read more on Kuda Kepang COMPLETE with the spells and its meanings, click here.

And just to end of, here’s a short video I extracted from the many Kuda Kepang performances in Singapore and YES, it is still being practiced here in modern Singapore.

Whether or not this performative art is accepted in Islam, I think that’s only something that perhaps the Islamic scholars will be able to answer.