I had never been in an ambulance. I have always though, been the one to call for it for others including for my mom once when the ceiling concrete in our old kitchen decided to give way and give my mom a head injury which was thankfully, not life- threatening.

This time, I was in the ambulance and the Trainee paramedic was asking me all sort of questions, mostly to ascertain more information about my injury with the female Ssgt looking on. The ambulance ride was pretty much comfortable with it’s fully air-conditioned interior.

The first thing I did when I got on the ambulance was to call my mom, who, luckily, was in Singapore (she’s migrated already). It was quite funny initially when she thought I was headed to the hospital to visit a friend despite saying I was in an ambulance. Eventually, she understood and got into a frantic state over the phone.

The arrival at the hospital totally made me begin to feel absolutely useless. I was wheeled in via a wheelchair which I couldn’t navigate on my own because I only had one good hand. I was dressed worst than X-Men’s Prof X but was hoping that I looked at least a bit better than him.

I was checked by a nurse on my initial condition and overheard that another patient that just got wheeled in was probably having much more terrible day – Vaginal Bleeding and Infection. The description was beyond my imagination and it irked me just to be there.

I was later then wheeled to another area where I was due to see a doctor. A 30min wait and texting over the phone to keep me occupied, I was finally wheeled in to see the doctor who on first instance, ‘I send you for X-Ray’ and off I went to the X-Ray dept. By now, mom had arrived and was waiting outside for me.

When I finally got wheeled back in to see the doctor after my wounds were cleaned and given due dressing, I finally saw the condition of my forearm. I saw clearly from the X-Ray that one of my forearm bones had totally broken off and was in a different position and my wrist bone had been totally displaced thus, explaining why my forearm had looked as such. 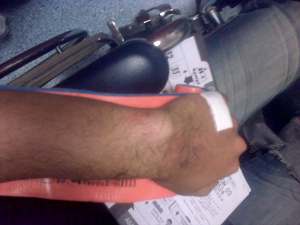 With that, the doc said, ‘You’re going to need to go for operation tonight’.

Being admitted to Ward 36 Bed 23, it was my first admission to a hospital since being an infant. 3 doctors then came to assess me and confirmed that I was going under the knife that night. They just couldn’t confirm the time though which meant that I wasn’t allowed to break fast at all until the surgery was over.

By 9pm, I was still waiting and just as I was getting in to bed, an old friend popped up! Kadir, who used to be admitted in the same ward kept me company with his stories for the next one hour and had begun his first line with, ‘I know how it feels to be in hospital on the first night’.

After he left, even with the clock ticking close to midnight, I hadn’t heard any news of my surgery and was convinced that I’d be woken up in the wee hours for it. I then went into a first painful night sleeping with a broken arm in hospital.